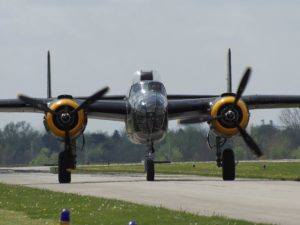 “Champaign Gal” N744CG is a 1944 B-25J converted to a TB-25N serial number 44-28866. The aircraft was built during WWII but did not see any action. It was used as a training aircraft while in the Army Air Forces and then saw various duties while active in the US Air Force after WWII. In 1958, 44-28866 was converted to civilian use as a fire fighting aircraft and was used to fight forest fires in the western USA. By the late 1980’s the aircraft had seen its day and was not in active use. In the 1990’s a volunteer group in North Carolina started a restoration process to return it to its war time look. The airplane was eventually purchased in 2007 by the Champaign Aviation Museum. Today we fly “Champaign Gal” to airshows and airport events so that the public can appreciate the fight for our freedom during WWII.For more information: WEBSITE

The North American Aviation T-6 Texan is a single-engined advanced trainer aircraft used to train pilots of the United States Army Air Forces (USAAF), United States Navy, Royal Air Force, and other air forces of the British Commonwealth during World War II and into the 1970s. Designed by North American Aviation, the T-6 is known by a variety of designations depending on the model and operating air force. The United States Army Air Corps (USAAC) and USAAF designated it as the AT-6, the United States Navy the SNJ, and British Commonwealth air forces, the Harvard, the name by which it is best known outside of the US. After 1962, US forces designated it the T-6. It remains a popular warbird aircraft used for airshow demonstrations and static displays. It has also been used many times to simulate various Japanese aircraft, including the Mitsubishi A6M Zero in movies depicting World War II in the Pacific. For more information: WEBSITE

Originally designed as a trainer for the Royal Canadian Air Force, our 1956 deHavilland Chipmunk has been specially modified for Airshow aerobatics and Skywriting. Nearly 3,000 man-hours over a two year period were spent on developing the GhostWriter into the finest example of a Super Chipmunk. It now boasts a cruising speed of 150mph, and a range of more than 500 miles. It will climb at a rate of 2,500 feet per minute, with a ceiling of 17,500 feet. If you recognize the airplane, that’s no surprise.  GhostWriter developed a well established career in the Airshow and Skywriting industry as the Pepsi SkyDancer for 25 years.  In 2016 Nathan K. Hammond took the controls and has been captivating audiences with the smooth lines and raw horsepower of the unparalleled Super Chipmunk ever since.   GhostWriter Pilot: Nathan joined SkyDancer 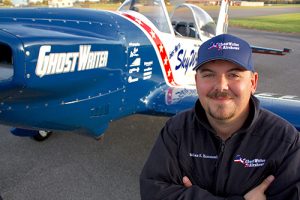 Airshows in 1998, quickly learning the techniques and nuances of Skywriting and Airshow flying.  Today, Nathan flies the Super Chipmunk, the GhostWriter, in both daytime and nighttime airshows; as well as skywriting across the nation.  The passion of flying was instilled into Nathan from his earliest days.  Born and raised in Rhinebeck, New York; the airplanes and airshows of Old Rhinebeck Aerodrome started his flying career.  Soloing an airplane at age 16, earning his pilot’s license at 17; Nathan has logged over 7,000 hours flight time, from 1917 Curtiss Jenny’s to Cessna Citations.  Along with being a Commercial rated pilot, he also maintains an Airframe and Power Plant Mechanics License.  For more information: WEBSITE

Development of the aircraft began during the Second World War in 1943 as an aircraft suitable for combat that harnessed the new innovation of jet propulsion; it was quickly decided to opt for a single-engine, twin-boom aircraft equipped with the Halford H.1 turbojet engine, which was later known as the de Havilland Goblin. Originally ordered as an experimental aircraft only, the decision to mass-produce the aircraft as an interceptor for the Royal Air Force (RAF) was finalized in May 1944. In 1946, the first production aircraft entered service with the RAF, months after the conflict had come to a close. The Vampire was the second jet fighter, after the Gloster Meteor, operated by the RAF, and it was the service’s first to be powered by a single jet engine. The Vampire was quickly used to replace many wartime piston-engine fighter aircraft. The RAF operated it as a front-line fighter until 1953. About 3,300 Vampires were manufactured. Vampire Pilot: Jerry Conley, President of Vampire Aviation,

LLC. and chief pilot. Jerry’s flying career started at eight years old when he got a kids book titled “Jerry the Jet” and the rest is history. Having 35 years experience, Jerry’s flying experience includes aircraft such as Beecraft Bonanza, Cessna 172, Citabria, Super Decathalon, SAI Marchetti, Bell Helicopters, HA-200 Casa Jet, Dehavilland Vampire, Dehavilland DH-112 Swiss Venom, L-39, and AVL-29.  Jerry has performed at Airshows across the country fly high performance jet aircraft for 13 years. Jerry holds an 250′ Aerobatic low level card with Jet certification. Jerry is also an avid car enthusiast having built a high performance 1966 Cobra sports car. Whether in the air or on the road, if it goes fast that’s were you’ll find him. Jerry is proud to have served our country in the United States Air Force and is an honorably discharged veteran. For more information: WEBSITE

Emerson Stewart is a 3rd generation pilot with over 12,000 flying hours. He has 20 years of airshow experience, Nationally and Internationally.
Emerson has also been a flight instructor specializing in tailwheel and aerobatics for 22 years. He learned to fly at a young age at his family’s airfield, named after his Grandfather, Red Stewart Airfield in Waynesville Ohio. His wife Kim is a tailwheel pilot and their two young children enjoy flying as well.  He has a Facebook page, “Emerson Stewart Airshows” For more information: WEBSITE 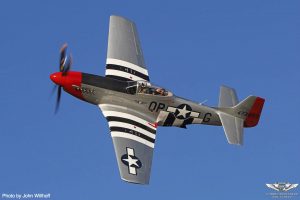 “Old Red Nose” has had a long and colorful history, dating back to the closing days of World War II. It was produced at the North American Aviation plant in Inglewood, California, and rolled out on 11 April, 1945 and was to accepted by the United States Army Air Force (USAAF) as serial number 44-73843. It was shipped to Page Army Air Force Base in Florida later that month and assigned to the 388th AAF Base Unit of the Third Air Force. Little is known of its service there, but it was probably used for training purposes. In September of 1945 the aircraft was transferred to the 336th Base Unit stationed at Sarasota, Florida. In November of that year, it was shipped to Hobbs AAFB in New Mexico and placed in storage. Its only other journey in the next six years was a transfer to the San Antonio Air Material Center at Kelly Air Force Base in 1947. For more information: WEBSITE